Jon Miro was a versatile artist has he excelled not only in painting but was also a ceramicist and sculptor. Miro had a unique style of surrealism, clearly reflected through his paintings. He was in favor of the surrealist painting and shunned the traditional bourgeoisie methods were the visual elements were not well presented. Some of his works of art were merely pictorial signs rather than anything concrete, highlighting his mindset to the fullest. Pablo Picasso was one of the prime inspirational forces behind his paintings and sculptures. A museum by the name of Fundació Joan Miró had been established in 1975 in Barcelona to honor his works. 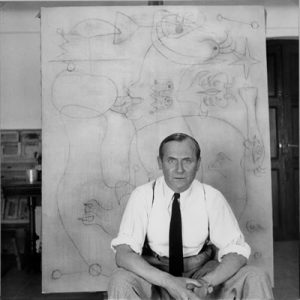 Biography of Joan Miro in a Nutshell

Joan Miro made this painting at the age of 24, and according to some, the influences of Van Gogh seems to be prominent. Vincent Nubiola, the main subject of this work was a professor in the field of agriculture, at Barcelona’s School of Fine Arts. Miro came in contact with him when he was a student of art in Cercle Artístic de Sant Lluc at Barcelona. In this painting, Miro is shown sitting on a chair, next to the table, containing fruits, a potted plant, and porro (wine vessel from which wine may be directly drunk). The backdrop behind Nubiola’s figure has abstract symbols of arcs and triangles. Nubiola’s collared shirt is red, symbolizing his political radicalism. Acquired by Picasso for a certain period, it has been a permanent collection of Germany’s Folkwang Museum.

The theme of abstract expressionism, in which Joan Miro specialized, has been observed in this particular painting. The big red circle, here is the sun, sitting against a blue plain, which is the clear sky. Abstract lines and circles are also seen encircling the figure. He had a particular inclination towards projecting the different elements of the universe on his canvas, which this work bears testimony.

Between 1929 and 1938, Joan Miro presented a series of his works through free, confident brushstrokes, presented through flat colors as well as simple shapes. This particular work of art comprising of two pictures, were initially a part of a series of unique collages derived from catalogs and newspaper cuttings, depicting parts of machinery as well as objects of daily living.

The plethora of colors and abstract images used in this painting gives it a unique appearance.

This amazing painting had been made between the summer and winter of 1921 and 1922 respectively. Primitive realism combined with Cubism is what the Farm is all about. The particular work of art summarizes Miro’s life spent in the countryside.  Ernest Hemingway, the famous American writer, purchased this painting for gifting it to his wife. Mary Hemingway (his fourth wife) gave it to the National Gallery of Art located in Washington DC, that preserves it at present.

Still Life with Shoes is one of Miro’s strangest and important paintings where he expresses his concern and agony about Spain’s situation, which had been in complete devastation because of the Civil War that had grasped it completely. In fact, through the painting, he tries to describe the evil and monstrous forces of war which crippled human life completely. To the left lies an apple pierced by a fork as well as a shoe. Red, acidic yellow and black are the main colors dominating the canvas, symbolizing a catastrophic landscape. The round shaped lines in the horizon create a sense of dynamism, while the abstract shapes in the horizon resemble dark clouds forecasting the onset of a tragedy. This work is said to bear a striking resemblance with Picasso’s Guernica, because of the sense of desolation and the devastating theme of war portrayed.

This work of art is a three-part presentation of Miro’s abstract oil paintings which portrays the thoughts running through his subconscious mind. Blue symbolizes the ethereal night where dreams exist in their purest form, free from the influence of rational and conscious thinking. In Blue II, there has been a usage of sparse but uniform brushstrokes, adding a sense of emptiness to the painting. All the three paintings are identical to one another in terms of simple lines, matching colors and shapes.

The Dancer by Joan Miro is an absolute representation of poetry, infused into the work of art. The canvas was first filled with brown paint and then smeared with an ultramarine blue layer in rapid and broad movements. However, the end product is such that the blue layer dominates the entire painting while the brown shade appears on the edges. The Dancer occupies the right of the canvas, presented through a round head, in shades of light and dark. It has been linked to a red heart, the tip of which has genitals attached to it. The straight, uninterrupted lines running from top to bottom, indicates the direction of the dance. Miro had been inspired to make this painting during Christmas in Barcelona when he had observed a dancer at the Eden Concert (a bar).

The image painted here resembles totemic figures, with the application of pure colors over big areas. This is one of those paintings through which Miro tries to project his feelings about the evil effects of warfare.

Using strong black, brushstrokes, alongside a series of strong colors, Miro creates a portrait of his self with distinct features.

11. Women and Birds at Sunrise

Post-1945, the use of bright surfaces, made Miro popular among the public. The woman at the center presented in a slightly voluptuous way, with small birds fluttering around, creates a magnificent effect.

The use of geometrical shapes and lines, give this abstract art a meaningful significance.

Miro had a strange fascination for sculpture since the time he was 19, and this work is a reflection of his creative genius. He had started sculpting miniature bronze statues since 1944, and in this one, the face of the object is lunar-shaped, bearing resemblance with some of Miro’s works based on the theme of the cosmic world.

A significant sculpture of Joan Miro, this large form is seen gracing at one end of the Joan Miro Park (Parc de Joan Miro). Standing at the height of 21 meters, this work of art alludes to the theme of feminity, where a bird surmounts the female form. The work was initially known as Lady-Mushroom with a Moon Hat that justifies how the figure has been presented, donning a hat, with a crescent moon sitting on top. The ceramic tiles of blue, red, green and yellow cover the sculpture. In 2014, February, it was to be auctioned for $6.5m to $11.5m, which was however canceled.

This artwork is a part of 7 dream pictures created by Miro on being influenced by Paul Klee’s narrative geometry and surrealistic approach. This painting represents a circus, with a blue background providing a dancing stage for the horse. The yellow whip of the ringmaster crisscrosses the canvas, adding to the uniqueness of the painting. A critic had once remarked of the magical effect created by Miro’s painting.

16. Ciphers and Constellations, in Love with a Woman

This is one of the 23 pieces of the series Constellation. It is a sheer work of abstraction where the artist presents birds, women, and stars, overlapping one another creating a particular color space. The background in most paintings of the series has soft tones. Intersecting black lines feature most of the paintings while the prominent features are depicted using primary colors.

Miro combines abstract shapes to present his artistic imagination. The fish’s head is on the left, and two circles have been used for depicting his eyes. A sense of playfulness and simplicity dominates the painting and pure color tones may be noticed throughout.

The rope, the center of attraction of this painting has been presented in an upright fashion, representing a human figure. Its way of presentation makes it look like an elongated body. The rope stands for violence, perhaps depicting Miro’s agony against the after-effects of the terrible war.

Other significant works of Miro include the “Great Cat,” “Woman, and Dog in Front of the Moon,” “There was a Little Magpie” and “Daybreak”.