16 of the Most Famous Andy Warhol Paintings

Andy Warhol, the eminent American artist, occupies the most significant position among the practitioners of the 1960’s Visual Art Movement “Pop Art”, dealing with subject matters very much existent in the viewer’s immediate environment. Warhol used commercial items such as Brillo boxes, soup cans, and even handguns, so as to critically showcase the growing abundance of his times, and to deliberately distance his paintings from personal involvement. 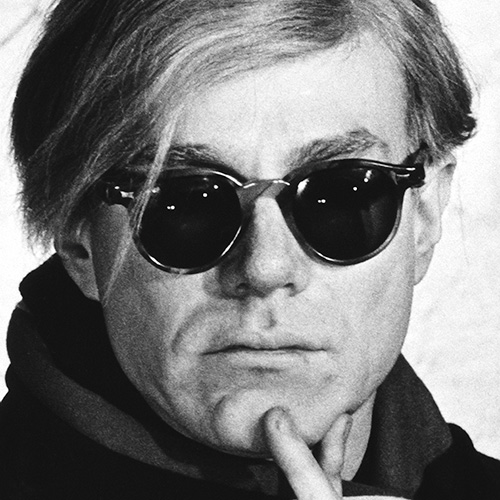 Highly acclaimed for revolutionizing the concept of art, Warhol completely justifies the title bestowed on him, “Pope of Pop Art”.

Biography of Andy Warhol in a Nutshell

Consisting of 32 canvases, each representing the 32 varieties, offered by the company in those times, this magnanimous work manifests Warhol’s skilled utilization of a theme highly relevant regarding the booming prosperity the Americans enjoyed. He craftily creates an experience of being in a huge supermarket, and in doing so, his art is said to both celebrate and criticize the expanding abundance of his day.

Marilyn Monroe’s publicity photograph in the 1953 film “Niagara” was the basis for this masterpiece of 59 images. Strikingly, 25 of them appearing on the left side have a brilliant shade, while the 25 on the left have a faded tone in black and white. Following the actor’s death in August 1962, the painting is considered by many critics to portray the star’s mortality. Regarded an iconic symbol of pop art, Marilyn Diptych was declared the 3rd most influential piece of modern art by “The Guardian”.

Another painting known as “Turquoise Marilyn”, also revolving around Marilyn Monroe, claims to be one of the most expensive paintings in the world, having been sold for a grand, $ 17.3 million.

Also referred to as the “Piss Paintings” the creation of these ingenious artworks involved a gruesome phenomenon. A group of friends was invited to urinate on a horizontally placed copper canvas so that it would oxidize. As the uric acid reacted with the copper, mineral salt deposits evolved at varied rates, at times turning green or blue or black. As per Warhol’s estimation, “[these paintings] had technique, too. If I asked someone to do an Oxidation painting, and they just wouldn’t think about it, it would just be a mess. Then I did it myself — and it’s just too much work — and you try to figure out a good design”. Today, this mind-blowing work triggers multiple interpretations, to some, it’s an insult to art, while to others, it is a poignant reflection of the liberty art endows.

After Warhol recovered from the brutal gunshot by American radical feminist Valerie Solanas, he was shaken both mentally and physically. But, even much before the incident, he was obsessed with the idea of life and death. Made almost 13 years post the assault, the paintings are a vivid portrayal of the way violence was commercialized in Warhol’s society.

Though Warhol did not have any interest in painting cows, he got involved chiefly due to the influences of the Pop art dealer, Ivan Karp along with printmaker Gerard Malanga. The foremost in the print series, it manifests Warhol’s extensive usage of bright and vibrant colors to produce the impression of seeing the subject on an acid strip.  Actually, the series consists of four-color schemes   “Pink Cow on Yellow Background” (1966), “Brown Cow with Blue Background” (1971), “Yellow Cow on Blue Background” (1971) and finally “Pink Cow on Purple Background” (1976). All the screenprints imbibed a decorative quality when they were printed on wallpaper.

For this stunning piece, Ronnie Cutrone, one of his assistants, had been asked by Warhol to take several pictures of a skull, placed on a trestle in different light zones. Warhol wanted to make his painting under a variety of dramatic shadows so that it became an amalgamation of an array of lights and darkness. As expected, the foreheads, as well as the cheekbones of the skulls, are brightly lit but the eye sockets are cast in deep shadow. Comprising of 6 canvases, each of the skulls in vertical grids of 3 rows of 2, produces a photographic image that is unparalleled and unique.

The series of paintings here claims recognition for the departure Warhol undertook in 1984 from drawing his habitual celebrity portraits. Cropping images of old master paintings, he infused in these vibrant hues in kitschy style, a dimension that was predominantly his forte. Moreover, the silkscreening method essentially eased his process of recreating the original masterpieces.

A product of acrylic and silkscreen ink on canvas, this painting is noteworthy in highlighting the relevance currency enjoyed in society and precisely in Warhol’s life. The pop artist had a fervent desire to accumulate wealth, and the work sketches his fixation of glitz, glamour, and affluence.

Warhol’s Myths portfolio contained several characters from Mickey Mouse to Dracula, of which Superman is one. The iconic figure in his red and blue cape is here juxtaposed with another image with a lighter outline, thereby presenting the impression that he has been captured while still in flight.

Warhol was the manager of the band “The Velvet Underground” in the 1960’s and as the cover for their debut album, he chose to paint a banana; an unusual theme that has been a mystery to his fans ever since. Nonetheless, it is based on how, stumbling upon a banana peel in a junk shop, Warhol had hitched on to the idea.

Again reminiscent of a departure from the world of consumerism, this painting drew its source from photographs taken by the nature photographer, Patricia Caulfield that were published in the 1964 issue of Modern Photography. Dwelling on an abstract subject, the paintings were sold out as soon as they were put on show.

Having a 12-foot frame, it features 8 identical images of the enigmatic American singer Elvis Presley, all overlapping with one another. Sold for a whopping US$100 million in 2008, this masterpiece of Presley, clad in cowboy attire, is noteworthy for making Warhol the 5th artist to get a work sold for $100 million.

As a reaction to U.S. President Richard Nixon’s first visit to China in 1972, Warhol got hold of the totalitarian leader, Mao Zedong and created hundreds of varied sized canvases of him. He combined paint with silkscreen and chose canvases as large as 15 ft x 10 ft for suggesting through his drawing the power mao exercised over China. However, the graffiti-like splashes of color, the blue eyeshadow resulted in defacing Mao’s image. In fact, the expressionist brushstrokes of Warhol reflect the freedom art enjoys to drive home the point of view of the artist, in this case, a poignant rejection of Communist propaganda.

Comprising of 60 pairs of lips created out of prints and collages of images delicately silkscreened into multiple tapes, this entire series of 3 albums upholds Warhol’s fascination with mouths.  In fact, the three albums utterly dedicated to “lips” also recall Warhol’s iconic images on Monroe, Taylor and even Chairman Mao, where his intentional outlining of each pair of lips rendered them as the focal point of each work.

Warhol’s earliest paintings when he worked as a young fashion illustrator in 1950’s, concerned shoes high heels, pumps, or jeweled stilettos. This work, made on medium weight cover stock in 1981, depicts his inclination towards his favorite subject even after he had gained fame as an artist. Specifically, the high-quality printing imparts this piece a sharp appearance and its silken finish endows an elegant look.

The whole objective behind Swiss psychologist Hermann Rorschach’s ingenious phenomenon, called “Rorschach Test”, in making his patients say what they saw in a set of 10 standardized ink blots was to gain an idea of one’s unconsciousness. Warhol seized the idea since he firmly believed that when a person saw an abstract art, he just interpreted it as per his thoughts, as opposed to what the artist had tried to convey. Accordingly, we have a large series of Rorschach paintings that seek to surface the viewer’s own perception, whether some insect, simple wallpaper designs or even a human genitalia.

Besides these, there are other paintings like that of Jim Morrison, John Lenon, Farrah Fawcett, and Mick Jagger along with those in black and white that are equally noteworthy.