14 of the Famous Paintings by Diego Velazquez

Diego Velazquez, one of the significant painters belonging to the Spanish Golden Age, was an artist in King Philip IV’s court. He is notable for his paintings of the royal family, prominent European aristocrats as well as commoners. His techniques of loose brush strokes, and the brilliant interplay of form, color, and light, gave his paintings a realistic appeal, being an inspiration for a host of painters like Edouard Manet, Pablo Picasso, and Francis Bacon. 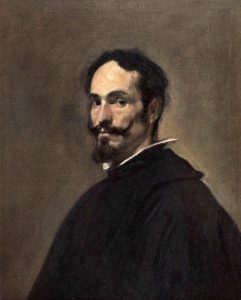 Biography of Diego Velazquez in a Nutshell

When serving as the court poet of Philip IV, he portrayed a lot of jesters and dwarfs in his works of art, depicted with a lot of respect and dignity, and not ridiculed or mocked. Don Diego de was an object of fun in the court mostly because of his physical deformity. However, here he is presented in a dignified way, shown reading a book, which hints at his gentlemanliness. The presentation of his eyes and overall attitude highlights his sense of intelligence.

This work of art is one of Velazquez’ painting of the royal family, depicting a room inside the Royal Alcazar, Madrid, where several figures have been presented, with some interacting among themselves while a few gazing towards the viewers. The young Margareta Theresa is seen surrounded by her maids and guards, while Velazquez is also seen right behind them working on a canvas. Through the mirror presented at the background, the king and queen can be seen, though partially. This complex portrayal has a brilliant fusion of the real and the imaginary, thus regarded as one of the most analyzed works in Western painting.

3. Philip IV in Brown and Silver

A life-size portrait of King Philip IV is shown here in a brown and silver outfit and not the usual black costume he mostly wears. The painting made with complete luxury depicts the rich embroidery and grand costumes of the king. The small rapid strokes give it a realistic touch. The painter leaves his signature in this artwork, observed in the envelope held by the king. At the Hamilton palace, this painting was sold for £6,300; the highest price offered for Spanish paintings

Another biographical portrait of a young Balthasar Charles of the Spanish monarchy made when Velazquez was commissioned for a host of equestrian artworks. In fact, this beautiful portrait fills in the space between the two bigger equestrian portraits of both his parents. The serious and calm expression of the little boy has a political implication, signifying the strong and confident leader he would grow up to become. The baton held by him, alongside the sword and sash symbolizes his authority.

A frontal nude painting, this piece of art is a rare genius of Velazquez because even though it does not have a supporting narrative, it attains a high level of excellence due to its serenity, nobility, and dignity. The halo encircling Christ’s head seems to be radiating throughout his body creating a divine effect. Christ’s straight hair covering a larger part of his face is perhaps the hint of doom and death which has already occurred because of his crucifixion. This realistic work of art lacks the dramatic qualities of the Baroque style of art as observed in the other paintings.

6. Portrait of the Count-Duke of Olivares

Gaspar de Guzman, the central character of this painting was a nobleman of Spanish descent as well as a powerful politician in the court of King Philips IV of Spain. His increased intimacy with the king makes him rise to the stature of a monarch, which is why he is seen on horseback in this painting, a power reserved for only those who have access to the throne. Though Guzman possessed a massive and clumsy body stature, Velazquez’ brushstrokes make him look sleek and slender. The rich treatment of light, the schematic landscape, alongside the pompous and vigorous design and color, transcends this painting to a different level altogether.

Also known by several other names like Venus at her Mirror, The Toilet of Venus, and Venus and Cupid, this is indeed a sensational painting, where Venus has been shown lying nude on her bed, glancing at the mirror held in front by her son Cupid. Nude paintings were not encouraged in the 17th century, and this is the only surviving work of art by Velazquez. The painting was subjected to vandalism on the 10th of March, 1914, when Mary Richardson, a suffragette tried to destroy the painting, subjected to six months of imprisonment for it. However, the damages were successfully repaired, and the National Gallery houses the painting at present.

The Kitchen Maid is said to be one of Velazquez’ early works of art, exposing Velazquez’ creative genius because of the intense amount of realism. The picture captures a Moorish servant at work in the kitchen, while at the background is seen the portrait of Christ’s last supper with his disciples at Emmaus. He uses soft and gentle strokes to present the servant and a bright background to depict the potteries and kitchenware. This is one of the two paintings on a similar theme by Diego Velazquez, with the National Gallery of Ireland housing the second in the series.

This is another of Velazquez’ dwarf paintings and the man in question is Sebastian de Morra, who served as a jester and court dwarf during the reign of Philip IV. He has been portrayed in a sitting posture, clad in a gorgeous cloak, looking towards the viewers in a motionless gesture sans any hand movement. Through his naturalistic style, Velazquez may perhaps have tried to show his empathy towards these dwarves also enouncing the treatment meted out to them.

He had painted this magnificent piece of art when he visited Italy in 1651, and most critics hail it as one of the best portraits ever made. Shown wearing a linen robe, the pope, perceived as an intelligent yet clever man has been captured brilliantly. The red patches on the pope’s face and the searching look created in his eyes makes the painting even more lifelike. The parchment borne by the Pope in one of his hands has Velazquez’ signature. The painting remained confined within his family for long, before being revealed to the public.

One of Velazquez’ last painting made a year before his demise; this is another brilliant work of art. It is one among the several paintings of the little princess the artist made on several occasions. Margarita entered into nuptial ties with her uncle when she was just fifteen, and these paintings were made to show her fiancé what the beautiful girl looked like in various stages of her childhood. Margarita was all of eight here, wearing a frilled blue dress made of silk decorated with silver borders. He uses loose brushstrokes to present a pretty, appealing, innocent and calm image of a little girl.

This is the title of the three of Velazquez’ painting displayed in the Apsley House’s Waterloo Gallery.  The water seller, the main subject, is said to have two customers, a young lad at the forefront and a man in the background. The pensive, wrinkled face and plainly clothed appearance of the water seller creates a calm and realistic ambiance. The second version housed in Florence’s Uffizi Gallery displays a sense of burlesque-ness showing the seller donning a red hat. The third version, on the other hand, shows the water seller in a sad and farcical expression, lacking a sense of depth unlike that of the first version.

This captures the theme of the New Testament showing the Virgin Mary in a standing posture upon the moon surrounded by a galaxy of stars. It was hung along with its companion portrait initially at a Carmelite convent at Seville.

A satirical painting of Mars, this has been inspired by one of Michelangelo’s works. Instead of presenting the Roman war god heroically, he is seen sitting on a bed with his face partially concealed by the big-sized helmet he wears. The luxurious bedding covers his nakedness, while his word and shield are seen lying on the ground carelessly. His gaze invokes a sense of sympathy in the viewers instead of admiration and awe. The depiction of Mars is an indication of Velazquez’ lack of respect towards mythological figures seen in his other works too.