15 of the Most Famous Paintings by Peter Paul Rubens

One of the earliest and most eminent flag bearers of the Baroque style of art, Sir Peter Paul Rubens was a copious 17th century Flemish painter and diplomat who admired and looked to his Italian contemporaries extensively for inspiration. 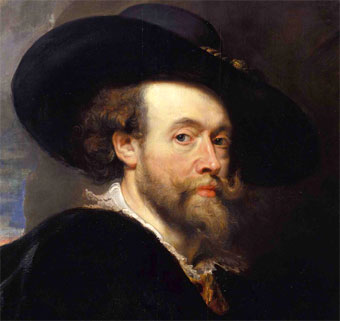 The linchpins for his highly graphic paintings were colour, movement, and sensuality. He was renowned for his mythological paintings, landscapes, portraits and finally, for his Catholic-Revival pieces.

Rubens also happened to be a classically educated humanist scholar, linguist, and architect. His catalogue lists approximately 1,403 pieces, barring those created in his studio in Antwerp.

Biography of Rubens in a Nutshell

1. Elevation of The Cross

Rubens’ affinity towards the Italian Renaissance and the Baroque style of art Christian finds crystal clear expression here. The painting depicts how elevating Jesus Christ pinned to the cross is a task more herculean than anticipated, even for the evidently brawny, able-bodied men. The crux which Rubens conveys here is that the very sin that was the crucifixion of Christ weighs heavily upon the conscience of all of mankind.

Even through the decades, this classic by Rubens continues to be one of his most stirring pieces, often weighed among the top 10 paintings ever recorded in the history of art.

2. The Descent from The Cross

This painting forms the central panel of a triptych piece by Rubens. The Venetian tradition, as well as Caravaggio’s influence, happens to be quite visible in it.

The Descent From The Cross was commissioned in 1611 and served as an altarpiece for the Cathedral of Our Lady. The very vision of Christ’s diagonal, lifeless body being pulled down from the cross is tremendously evocative. Like The Elevation of The Cross, this painting too exhibits his allegiance to the Counter-Reformation Movement.

Though there are some noteworthy differences, this painting is a copy of Titian’s work on the same subject. The painting, also called Adam and Eve, sheds light on the unmistakable influence of Jan Brueghel The Elder on Rubens. However, Rubens distinctly alters Adam’s posture, gaze, built as well as expression. He also included a parrot on Adam’s right, a component that is absent in Titian’s piece.

This painting captures one of the most significant incidents ever recorded in Christian mythology. It marks the very moment wherein Eve plucks the Fruit of The Forbidden Tree and triggers the fall of mankind from grace; thus referring to ‘Man’s First Disobedience’, as phrased by Milton.

4. Massacre of the Innocents

This masterpiece is analogous with chapter two of the Gospel of Matthew, wherein Herod the Great called for the execution of all male infants of ages two and below for the fear of losing his throne to a new born king of the Jews. This is the first of the two paintings by Rubens that were based on this biblical account.

The painting was rediscovered in 2011 and sold in 2012 for $117 million at an auction to Kenneth Thomson, a Canadian art collector and entrepreneur, who then loaned it to the National Gallery in London for public display.

Saturn happens to be one of Rubens’ most graphic paintings with a deep rooted shock value. This piece is based on the Grecian mythology of Titan Cronus or Saturn wherein Saturn devours his own sons for the fear of losing his throne to one of them. The painting was commissioned for Torre de la Parada by Philip IV of Spain.

Saturn exhibits a heavy influence of the Italian Renaissance painters like Michelangelo. Even the influence of scientific discoveries on art itself is reflected in Rubens’ depiction of the planet Saturn as described by Galileo. Among the three stars in the background, the one in the middle is supposed to be Saturn, whereas the original rings around the planet were described as two more stars back then because of the lack of technological advancements.

6. Susanna and The Elders

This painting, based on the story of Susanna and the Elders from the Old Testament, The 13th Chapter of the Book of Daniel, captures the moment when two of the ancient ones from the judges appointed by the people ambushed the beautiful wife of Joakim, Susanna, in her bathing chamber to manipulate her into laying with them. The Elders threatened to malign her character if she were to rebuff their advances.

This painting gives a good insight into Rubens’ grasp on the innocence and shock of Susanna at the lust and malice of the “noble” Elders. He beautifully portrays the sinful craving in the eyes of the Elders.

This oil painting by Ruben is a vivid representation of the themes of love and betrayal. It showcases a chapter about Samson and Delilah from the Old Testament wherein Delilah, Samson’s beloved, conspires to weaken Samson by getting her servants to chop off his uncut hair, the source of his strength, while he is sleeping in Delilah’s lap. The painting also depicts Philistine soldiers waiting outside the door to arrest Samson.

This piece was painted for a renowned lawyer and art collector in Antwerp by the name of Nicolaas Rockox. The painting was purchased at an auction at Chistie’s in 1980 for $5 million.

Based on the Greek Play Prometheus Bound by Aeschylus, this oil painting of Rubens’ classic Baroque style precisely depicts the plight of Prometheus. The painting was created in 1611-1612 and was eventually completed in 1618 when Frans Snyder, an expert animal painter, created the eagle.

The themes of excruciating pain, agony and utter helplessness are employed rather evocatively, where the eagle is shown to be brutally clutching Prometheus’ face and groin as it devours his innards, while Prometheus writhes in pain with his left hand chained.

Rubens derived inspiration for this painting primarily from Michelangelo and Titian. The painting has also effectively captured the true essence of the Greek wordsmith’s own masterpiece. Rubens himself described Prometheus Bound as the ‘flower of my stock’.

9. The Disembarkation at Marseilles

The Disembarkation at Marseilles is one of Peter Paul Rubens’most famous paintings of the Marie de Medici cycle, which consists of twenty-four paintings.

It recounts the then-Queen of France Marie de Medici’s advent into Marseilles on 3rd November 1600. Ruben, here, has captured the moment when a youthful Marie descends onto a red-carpeted plank, marking the beginning of her life as Queen of France. A wide array of Roman and Greek mythological characters, including Neptune, Fame, Nereids, and Fortune, have also been depicted in the painting.

Rubens’ very own interpretation and depiction of women in the nude is portrayed vividly in this masterpiece. This is one of his final works from his private collection. Here, the artist’s colourful demonstration of The Three Graces, or the three Greek goddesses of charm, beauty and elegance lies unparalleled.

Also known as Horror of War, this painting demonstrates Rubens’ outlook on how the Thirty Years’ War (1618-1648) wreaked havoc upon Europe. Rubens has used various symbols relevant to the myriad aspects of war including Mars, the Roman God of War. Venus, the Roman Goddess of Love, appears as an antithesis to Mars, whose pleas to the latter to cease such violent endeavours go unanswered. Evidently, Rubens conveys the triumph of war over peace and love.

While hunting was basically illegal in the 17th century, it was reserved for the aristocrats who killed exotic creatures for defense, pleasure and to take over their territories. In Lion Hunt, Rubens brilliantly juxtaposes the raw, unadulterated impulse of animals against the polished, calculated acts of man. Here, two lions are depicted being hunted by men on horseback as well as one of the men being victimized by the lion’s ferocity.

This graphic masterpiece by Rubens depicts the very moment wherein David, the prospective king of the ancient Israelites, is about to behead Goliath, the Philistine Giant. Biblically speaking, the painting portrays how David is the deserving king and protector of Israel and not Saul, for Saul fails to vanquish Goliath of Gath when confronted with him.

In The Garden of Love, Rubens extols his second and final marriage to Hélène Fourment, who was regarded as the most beautiful woman in Antwerp. The ambiance reflected in the painting is one of relaxation and flamboyance, set in Rubens’ own patio. The symbols of Cupid, two love birds, as well as the sculptures of Venus and The Three Graces, convey virility, marital bliss, and love. There is also a peacock, which is said to symbolize the Goddess Juno, the protector of matrimonial life.

The moment that followed the Crucifixion of Christ is depicted rather touchingly in this one, where Christ is to be laid into his tomb, preceding his Resurrection. At this very moment, he lies among his closest confidants – his mother Mary, Mary Magdalene, Mary, the mother of James and Joseph, and lastly, John The Evangelist. Through this painting, Rubens wanted to incite faith and empathy in the viewer by way of lucidly displaying the pale skin of Christ, his lifeless body, his gaping wounds as well as the grief of those who are mourning him.

Due to his distinct style and nudity dominating a majority of his paintings, they have been graciously conferred with the title ‘Rubenesque’ and even to this day, Rubens continues to be one of the most salient painters of all time owing to the freshness, minuteness and stratified symbolism of his monumental artworks.