14 of the Most Famous Paintings and Artworks by Raphael

A leading figure of High Renaissance, Raphael was an Italian painter, whose mastery lay in depicting emotions realistically in great details. He used several mediums such as metal-point, chalk, pen, and ink, leaving behind a large body of work, despite his death at the young age of 37. 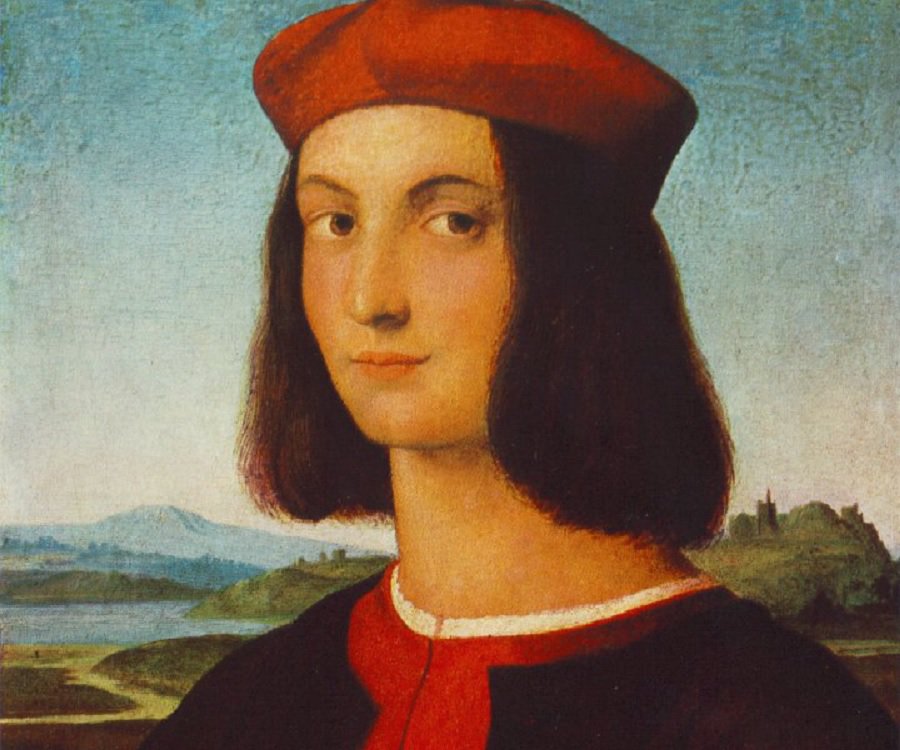 Biography of Raphael in a Nutshell

1. The School of Athens

One of the 4 main frescoes adorning the walls of the Stanze di Raffaello, in the Apostolic Palace of the Vatican, this masterpiece embodies philosophy. Naturally, there can be found every illustrious Greek philosopher amidst the 21 portrayed in the painting. However, it is difficult to ascertain the identities of all other than Aristotle and Plato, who occupy the center position. Reflecting the true classical spirit of the High Rennaissance, it is considered the most famous painting of the artist.

Representing Chastity, Beauty, and Armour, the 3 graces, Aglaea, Euphrosyne, and Thalia of Greek and Roman myth are shown dancing in a meadow here. Each holds an apple in one hand, while the other rests on each other’s shoulders, possibly suggesting sisterly affection.

3. Madonna and Child with Saint John the Baptist

This constitutes one of the many Madonna paintings made by the artist during his stay in Florence. It gains recognition on account of a harmonic balancing of the figures along with a high formal quality portrayed in each element.

Originally made for Guidobaldo Montefeltro, the then-ruler of Urbino (a city in central Italy), this painting is striking for its mood of utmost sorrow along with tinges of grandeur, achieved perfectly through a mixing of vibrant colors.

The upper portion of this art piece highlights the transfigured Christ attempting to free a possessed boy from the clutches of evil, while its lower part deals with the unsuccessful ministrations of the Apostles to achieve the same purpose. It is believed that the upper symmetrical portion and the lower chaotic one uphold the contrast between god and man.

6. Portrait of a Young Man

A richly dressed young man is seen sitting in this highly acclaimed painting, that was stolen by the Nazis from Prince Czartoryski‘s collection in Poland during the World War II. Believed to be inspired by the artist’s studies of ancient athletic and military heroes, its worth is expected to exceed 100 million US dollars, if recovered today.

7. The Marriage of the Virgin

The inspiration for this work was a painting on a similar theme by his mentor Pietro Perugino. Detailing a marriage ceremony between Joseph and Mary, its style is considered superior to the one made by his master.

8. La Donna Velata (The Woman with a Veil)

One of the most outstanding features of this portrait of his mistress, Margarita Luti, constitutes the authentic manner in which the woman appears – it makes the viewer feel as if he is looking at a real person and not a portrait.

9. Cherubs from the Sistine Madonna

The 2 cherubs of this art piece are universally acknowledged as the best angels ever drawn. They originally formed a part of the illustrious work ‘Sistine Madonna’ that was commissioned by Pope Julius II, a descendant of the noble Della Rovere family of Italy.

Also called “The Kinnaird Resurrection”, this forms one of the earliest paintings of the artist that marked out his naturally dramatic style of art. The special energy reflected in the work points out how he was aesthetically influenced by the Italian painter, Melozzo da Forli.

Originally an altarpiece in the church of San Domenico, Città di Castello, near Urbino, this work is distinguished in making the terrible look beautiful. Christ is seen raised high on the cross, looming up amidst an Arcadian landscape made brilliant by the suffused evening sunlight of a magnificent blue sky. The angels and saints Mary, John, Jerome and Mary Magdalene surround him and daintily collect his blood.

This small cabinet painting takes its subject from the tale of St George, a 3rd-century Christian soldier, who is believed to have rescued a pagan king’s daughter by killing a dragon. Guidobaldo da Montefeltro, the Duke of Urbino, was bestowed with the honor and accordingly he commissioned Raphael to make this amazing painting.

Also known as the Borghese Deposition, Pala Baglione, or The Entombment, The Deposition is a renowned painting highlighting the Deposition, Lamentation, and Entombment of Christ. It narrates the sorrowful story of the final days of Christ illustrating how his frail body is being carried by a group of young boys, prominent among whom is Grifonetto, to whom the painting is dedicated.

14. The Triumph of Galatea

This amazing fresco portraying the pretty sea nymph Galatea in the company of other sea creatures was made by Raphael for a rich family residence in Rome, the Villa Farnesina. Raphael, rather than representing the gruesome details of the Greek myth, chose to emphasize Galatea’s apotheosis or elevation to a divine status, thereby showing her rising from a chariot of clam shells towards heaven.

Other notable paintings of the master include Adam and Eve, from the ‘Stanza della Segnatura’, Madonna of the Rose, and Portrait of Pope Julius II.