18 of the Most Famous Paintings and Artworks by Rembrandt

Rembrandt was a noteworthy painter of Dutch origin, also making a mark in the fields of etching and printmaking. He showed versatility in his works which touched upon a host of subjects like portraits, landscape, self-portraits, history, and most importantly biblical subjects and mythology in which he excelled greatly.

The chiaroscuro techniques or the usage of light and dark elevated his work to a different level. His paintings bore his signature which went through a series of changes, and finally, he signed with his name “Rembrandt.” In his later years, he underwent a lot of financial hardships and personal tragedies and breathed his last in Amsterdam in 1669. 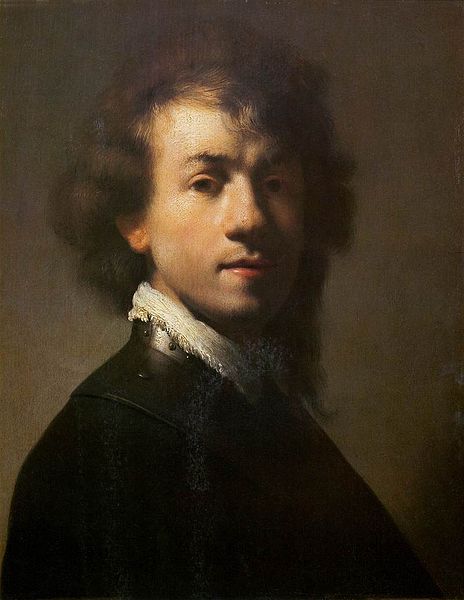 Biography of Rembrandt in a Nutshell

Famous Paintings and Artworks by Rembrandt

1. The Return of the Prodigal Son

The Biblical parable of the Prodigal son has been brilliantly captured here by Rembrandt’s artistic genius. The son returns to his father, wretched and shabbily clothed, after squandering the latter’s wealth and also gets forgiveness for his deeds. Rembrandt makes perfect usage of brush strokes to depict human emotions as there is love on the father’s face, repentance in the son’s, and discontent expressed by the older son. The father has been given paternal and maternal qualities at the same time, as his left hand appears masculine while the right one possesses a soft touch. The canvas also captures a woman at the top left-hand corner which could be the mother or sister while the man to the right is said to be the son’s older brother. The person who is seated is speculated to be a tax collector because of his elegant attire. The usage of light in this painting is made according to priority as the father and son are captured in full brightness, the older son is shown in partial light while the remaining two characters remain in darkness.

2. A Woman Bathing in a Stream

There has been a lot of speculation regarding the women portrayed in this work of art. Some think that she may be Rembrandt’s beloved, Hendrickje Stoffels, with whom he lived until the latter’s death, while a few also indicate the presence of a mythological or biblical theme. The gorgeous red robe as shown here suggests that the lady in question could be Bathsheba, Sussana or Goddess Diana, all of whom were secretly admired by the menfolk while they were bathing.

3. Descent from the Cross

Rembrandt has incorporated scenes from the Bible and the life of Christ in many of his paintings and this is one of them, showing Jesus being brought down from the cross post-crucifixion. Rembrandt was a genius in evoking emotions into his characters, and this artwork is no exception. The weeping and mourning of the females present and the more suppressed emotions of the males have been skillfully presented. Mary is shown unconscious, perhaps fully consumed with grief, while Christ’ twisted, unsettled body attains a rounded shape, reflecting a touch of Rueben’s voluptuous figures in Rembrandt’s works.

Regarded by 19th-century art experts to be one of Rembrandt’s remarkable paintings, it artistically presents a post-mill set against the background of a rough, stormy sky. People have different opinions regarding the central theme of this painting, with a few saying that he may have been inspired by the mill owned by his father. According to some the cloudy, overcast sky presented here may also be symbolic of the financial crisis which Rembrandt had been plagued by.

5. Landscape with the Good Samaritan

Being one of the six landscape paintings of Rembrandt on an oil canvas, this artwork captures the theme of the Good Samaritan, as narrated by Jesus in the Gospel. According to Luke or Gospel of Luke, a samaritan helps a traveler attacked by a gang of robbers. By presenting the Biblical event against a landscape background, he tries to reveal that the changes in the natural world have a great impact on human life. While the stormy and dark sky stands for evil, the rays of the sun and brightness signify goodness and positivity.

6. The Raising of Lazarus

Painted at the beginning of his career, this one is the few subjects of the New Testament captured by Rembrandt in his canvas. The chiaroscuro technique of painting, signifying the contrast of darkness and light has been implemented here to show Lazarus’ awakening from death. The burial cave and Lazarus remains in the darker part while the figures to the left have obtained more light.

It was commissioned by Frans Banning Cocq (represented in the painting in a black dress with a red sash), the mayor of Amsterdam to portray his shooting company on canvas. Though the canvas has 36 characters, only 16 of them were members of the militia in actuality, each of whom paid a decent amount to be featured. The use of the technique of tenebrism, contrasting light and darkness make the characters look more lifelike. Besides the major, two other important figures seen in light are Willem van Ruytenburch (clad in yellow with white sash) and a woman standing behind (mascot) with a dead chicken in hand.

8. Bathsheba at Her Bath

Rembrandt’s depiction of this story of the Old Testament, a subject touched upon by many, stands out because of the vibrant use of colors, and erotic presentation. This scene shows Bathsheba at the bath, holding the message from David who had secretly seen her and is charmed by her beauty. Hendrickje Stoffels once again poses as the model and the deformity observed in her left breasts by many medical experts make them conclude that she perhaps had breast cancer, lactation mastitis or abscess because of tuberculosis. The look of desolation on her face was speculated to be due to her illness or pregnancy.

9. The Storm on the Sea of Galilee

The only seascape painting of Rembrandt, having a Biblical story as its theme where Jesus miraculously manages to save himself and his disciples from a furious storm when they were traveling by boat on the Sea of Galilee. The chiaroscuro style or the contrast between bright and darkness subtly divides the painting into two halves. To the left, we find the elements of turbulence portrayed like the mad waves, boat tossing in the air, the people in distress and so on. The yellow light amidst all confusion stands for a ray of hope. The right side, on the other hand, is dark and obscure. After being stolen, it was not revived, and the empty frames r museum that once housed it.

Rembrandt depicts the mythological character Danaë sensuously portraying her with one hand raised, perhaps welcoming Zeus who was responsible for impregnating her. Initially Saskia, his wife posed as the model, but the face was later replaced with that of Geertje Dircx, his mistress. This magnificent work was subjected to vandalism in 1985 by an insane man though eventually restored.

11. Susanna and the Elders

Another artwork based on a Biblical theme, it depicts the tale of Susanna, mentioned in the Book of Daniel, accused by two elders who spied upon her seductively as she was bathing in her garden. The scene portrayed here is that where the lady is being harassed by the elders, though Rembrandt seems to portray her differently, as Susanna is in no way distressed, but has a curious look as if seeking permission about something.

The painting attained its present name in the 19th century when an art collector of Amsterdam interpreted a father-daughter relation between the characters, where the latter was gifting a necklace to the former on the occasion of her wedding. However, this notion has not been accepted, and the subject matter remains ambiguous with various speculations made. The use of bright colors against a dark background has been implemented brilliantly.

An anatomical portrait of Rembrandt for which he was commissioned, it depicts Dr. Nicolaes Tulp explaining anatomy lessons to a group of medical professionals. A full-length corpse dominating the center of the canvas is said to be that of Aris Kindt, a criminal, hanged to death on the charges of robbery. The corpse’ face is shaded partially, and his navel bears the letter “R,” which highlights Rembrandt’s creativity in using his signatures. The presentation is so realistic that it seems as if a story has been told on canvas.

A popular history painting, Rembrandt presents Lucretia, the ancient noblewoman of Rome who was raped and then committed suicide. In his painting, Rembrandt significantly portrayed the anguish and agony of Lucretia before she ends her life. He has brilliantly captured and put forth the dilemma in a woman’s mind when she is compelled to choose between dignity and her life. He has even painted a sequel after two years depicting Lucretia stabbing herself.

Using the medium of etching and drypoint, Rembrandt with his artistic brilliance creates this landscape print. The trees here are looked upon as a unified part of nature in the face of which everything else like the cowherds, a fisherman, and his wife, as well as a couple dressed elegantly, engaged in affection, appears insignificant.

This does not focus upon any particular event, but Christ featured in the center of the frame plays the part of a healer and preacher. The brilliant use of light and shadows adds to the mystical element.

17. The Man with the Golden Helmet

An elderly man wearing a golden helmet has been projected in this painting, though experts have revealed that this work lacked the Rembrandt touch but created by one of his students.

18. Aristotle with a Bust of Homer 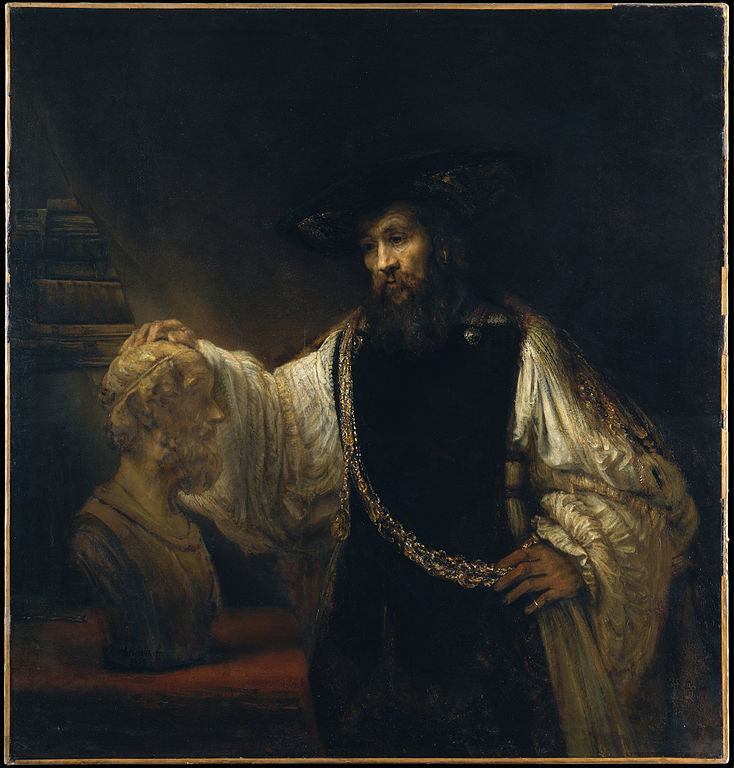 The great philosopher Aristotle, clad in a jeweled belt gifted to him by Alexander the Great, is seen resting his hand upon the bust of the great Homer. Rembrandt again plays with dark and light as the bust of Homer and the hand of Aristotle touching it is brighter than the left hand which holds the golden chain. He perhaps tries to signify that artistic brilliance overpowers worldly fame.

Apart from the ones mentioned above, other of Rembrandt’s popular works include the Three Crosses (in drypoint medium depicting Christ’s crucifixion along with two thieves), Five Senses (series of five oil paintings representing the five senses), self-portraits by Rembrandt (comprising one hundred self-portraits), and the Blinding of Samson.